It’s funny all the ways we were told to ask for Permission when we were growing up.  Please and Thank You were drilled into most of our heads.  Even in school we so strangely had to ask for permission to use the bathroom…

And so, at 40+ I just became aware of a new permission I must ask for…and it’s one that is my favorite so far…and one that I have found myself doing repeatedly since my attention was brought towards this gem.

I consider myself to be a rather ritualistic person.  The rituals are of my own making and have a different flavor every time, but still, there is a thread of similarity in them.  So, when I had a healing last week and the man asked me if I had asked Mother Maui for permission to live and work on the island, I was dumbfounded.

I call in Mother Maui along with a distinguished list of other guests to every treatment.  I wake up and thank Maui for the extreme blessing of being here.  I talk to Maui (not in an I need to be in an insane asylum kind of way…I don’t think) when I’m out walking in her lush gardens and overwhelmed by the sights and smells.

But did I, before I left or when I arrived on her beautiful land ask for permission to come aboard?

Jesus.  How ungrateful is that?

Of course I quickly admitted my short coming and prostrated myself and asked for massive forgiveness…which I like to think she heartily laughed at while watching me reproach myself with such fervor and immediately forgave my Western rudeness.

But this leads me to a never before (for me) opened box of worms about the nature of permission.  When it’s necessary and when I’ve been taking it for granted.  And maybe I’m getting way to native out here in the middle of the ocean, but I feel more connected to the thing I’m trying to access when I ask before I take.

My opening rituals which are always changing have found a firm beginning…asking for permission even to do the ritual before I begin.  I now feel like before I asked for permission I was interrupting the spirits while they were doing their nails.  Now they put down the file, and look at me and say, well…look at those manners!  How can we help baby girl?  (Hey, you see Spirits the way you do, and I’ll see them they way I do thank you very much!)

Permission is a lot like reverence, it’s just a little tiny itsy bit different.  First I ask for permission, then I bask in the reverence.  It’s the gateway drug, so to speak. 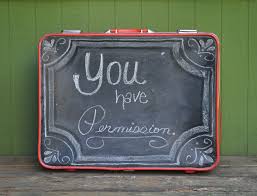 When I’m in conversation with someone and they say to me, “Would you be interested in hearing my thoughts on that?” instead of “I think you should…..” I feel listened to and somehow like I’m winning something versus bombarded with someone’s idea of who they think I am and what I need to hear…even if it’s exactly what I needed to hear.

If I’m asked, then I’m taking part in receiving the information, there is a portal of acceptance that opens.  And, quite frankly, I hear that advice differently.  Even if it’s exactly the same.

I try doing this in conversation (sometimes I forget because it’s just SO clear you need to hear this…) (I know…so wrong…) but I hadn’t prepared myself for the other person saying to my query for sharing my excellent insights, “Not really.”

So, that’s a possibility. And that’s good to know.  You were about to share with them information they didn’t want and might have offended them.  And, maybe you aren’t as important in that moment as you thought you were (I’m talking to myself right now.  It really did shock me they didn’t want my advice.)

Erring on the side of permission seems like a fantabulous idea! (Ego stinging and all.)

I asked the Meat I was cooking prior to putting it on the grill for it’s permission to feed and nourish me…and then I went vegetarian because I felt so bad.  So…be prepared for that as well…

From the middle of the ocean, I send you waves of paradise and flowers and smells and ocean breeze and humidity and mosquitoes, and tropical fruit right off the trees.

This website uses cookies to improve your experience while you navigate through the website. Out of these cookies, the cookies that are categorized as necessary are stored on your browser as they are essential for the working of basic functionalities of the website. We also use third-party cookies that help us analyze and understand how you use this website. These cookies will be stored in your browser only with your consent. You also have the option to opt-out of these cookies. But opting out of some of these cookies may have an effect on your browsing experience.
Necessary Always Enabled
Necessary cookies are absolutely essential for the website to function properly. This category only includes cookies that ensures basic functionalities and security features of the website. These cookies do not store any personal information.
Non-necessary
Any cookies that may not be particularly necessary for the website to function and is used specifically to collect user personal data via analytics, ads, other embedded contents are termed as non-necessary cookies. It is mandatory to procure user consent prior to running these cookies on your website.
SAVE & ACCEPT